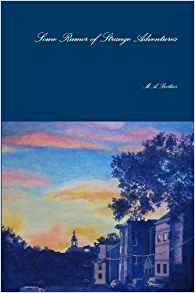 Some Rumor of Strange Adventures is challenging at many levels. For some readers, these challenges could represent a problem appreciating the novel. In most cases, however, the author’s extraordinary skills allow him to succeed, and regardless of how very close he comes to the edge of the aesthetic cliff. The book is set on the campus of a curious provincial university that somehow (miraculously, some would say) represents both a first-rate learning institution and a swamp of academic grotesques. The fictional Jason Gould University does not read like a contemporary institution—the professors seem far too competent in their fields, as well exhibiting an eclectic understanding of the humanities that seems like a survival of a by-gone era, if not actually the expression of author Berthier’s own broad reading and knowledge. A person who is as intellectually expansive as the professors in this novel would not be a professor, but rather a savant of some kind who would be unsuited for an academic life and academic politics; a person like Berthier, in fact, who, in addition to being a polyglot possessing an encyclopedic knowledge of European literature, is a PhD in Physics working “at a high level” in Silicon Valley. One wonders if Berthier is representing a liberal arts college of the 1960s or 70s (evidently drawing upon his own experience), and as well using the setting of a university to exercise his own vast learning and his own critical views—which are acerbic and, in the final analysis, aberrantly amusing. Now, I don’t wish to imply these characteristics in any way represent blemishes upon the surface of the story; nor is there anything anachronistic about the “old school” feel of Jason Gould University—the narrator makes it very clear that the story he tells describes events taking place thirty years before.

Another challenge readers will encounter is the protagonist--with the absurd name Nimrod Rothschild--who, in addition to coming from a criminal family, is himself a violent sociopath with “liberated” sexual mores, which moreover are as unbridled as his ability to rapidly absorb—and formulate opinions upon—the most abstruse bits of learning his professors can throw at him. This incongruous juxtaposition of narcissism and erudition is perhaps the author’s most striking and challenging achievement. Along these lines, bear in mind, too, that this is not a romance or a narratological battery of psychological conceptions. Indeed, it is a fiction rooted in that “modern” prospectus of the novel that the most boring prig should approve—Henry James, say, would admire this work for its formal mastery. Nevertheless, this novel exceeds its grounding in modernist aesthetics, and one wonders if, just maybe, Berthier is pulling—that is YANKING--the legs of the very same specialists he finds himself among, and whom he represents.

Enjoying a novel is a matter of taste; nevertheless, in the case of a true work of art, it is incumbent upon readers to set aside their aesthetic preferences and, come what may, allow an author to produce his effects. Peculiar intellectual combinations, anti-heroes, and transgressive scenarios are not always successful strategies, and sometimes they can fail miserably. In this novel, however, Berthier is able to achieve notable (dare I say “new”?) artistic effects, which will interest serious readers of cultured and intelligent literature.

Thanks for the sympathetic review, Carter.

About the portrait of the university, it was based on a number of things: my own attendance at a pretentious private university in the '70s; my work experience at the same university until '80; a continuous stream of scandalous anecdotes about the university through the '80s and '90s from friends and family who attended the same place, my own attendance at a large public university in California in the '80s; my observations about universities when I took my offspring on a tour of universities (including the same ones I attended) circa 2006-2007; finally, my visits to the small private technical institute where my offspring was ensconced until 2011. I also have students in martial arts who attended the University of California, Berkeley until around 2012 or so, and I picked up a number of amusing tidbits from talking to them.

I do not claim that my portrait of "Jason Gould University" is an accurate picture of some university in the American southeast. I will claim instead that it's a portrait the same way that Kafka's novel _Amerika_ was a portrait of the USA. Kafka never visited the USA. I have visited some of these places in the book, and they gave me material for a gothic/grotesque portrait.

The genesis of the book came as a flash whilst discussing the Parricide stories of Ambrose Bierce with a friend. I started thinking of the similarities between some of Bierce's characters and picaresque narratives. The first examples that popped into my head were Gil Blas and Simplicius Simplicissimus, but that led me to certain peculiar parallels with Thomas Mann's Bekenntnisse des Hochstaplers Felix Krull. I was immediately off writing. It didn't take long.

To say I am not to some degree filled with exasperation by the academic scene I portrayed would be disingenuous. It's clearly over the top satire. There are many things about academic milieux that strike me as swampy in the extreme. Fortunately, I don't live in that swamp.

You made an interesting point about the quality of the academics. You know that it's true that there are academics (I hope even today) who have a wide erudition and deep understanding of their own areas of expertise as well as their personal interests. I was very fortunate that, among the scholar squirrels and dry-as-dust pedants I served under, there were a dozen really excellent professors in languages, English literature, mathematics and physics. Perhaps I was lucky. Some of the graduate students during the time were also very good and helpful. I have a high opinion of people who rise above their environment, and there were some. I want to be fair.