Having rejected basic conceptions of social subordination along with the lawfulness of established church institutions, the English religious sectaries of the 1640s were free to entertain political and religious ideas that were variously fanciful, enthusiastic, utopian, and, significantly enough, modern.  In their analysis of the origins of political power, the limits of power, and the rights of human beings, the Independents and sectaries gave birth to the basic principles of the modern liberal state. At the same time, of course, the sectaries embraced the very un-modern belief of seeing themselves as part of a divine mission. As Christ’s elect, they sought to remove social and institutional hindrances to Christ’s rule on earth. They believed God intended man to live a better life and, to this end, they believed that men could understand this purpose and cooperate with God to bring about His will. In 1651 Milton writes in A Defense of the People of England, “God changes circumstances, assigns kingdoms, and takes them away . . . through the agency of men.” Victories in Parliament and upon the battlefield were to the radicals confirmation that God was supporting their actions. By this logic, however, failure might also reflect God’s disfavor. When confronted with the breakdown of the Protectorate and the Restoration of Charles II to the throne of England, the radical’s idealism and Millennial hopes turned to disillusion, and there was by the 1660s a retreat into quiet nonconformity and skepticism.  Christian utopians looked for their Promised Land in the next life. The Quakers became pacifists.  Realizing the Good Old Cause must be left to future generations, Milton resorted to writing a vigorous and lawless modern poetry in the guise of religious epic. With the aid of politicians like Shaftsbury, however, the torch was passed successfully. Locke’s First Treatise on Government not only contains polemics against the patriarchal absolutism of Sir Robert Filmer and the authoritarian materialism of Hobbes, but also looks to Milton as a source for observations and rebuttals.
When considering the English Bill of Rights and the ascension of William and Mary (which, incidentally, seems in large part to have been orchestrated by Locke), the historical connections drawn together in Hawthorne’s short story “The Gray Champion” come to mind. Hawthorne tells the story without irony or subtlety, and his politics are clearly evident. The story is set in 1688 at the end of the reign of the Popish King James II. An old veteran of Cromwell’s wars (perhaps he is a ghost) is a recurring presence in the American colonies where, in the episode presented by Hawthorne, he witnesses the arrogance of the Episcopalians in church and government. Hawthorne opens the story with a description of the procession of James’s colonial government filing down the main market street in Boston. Magistrates, soldiers and Popish ministers—wearing crucifixes, no less—march arrogantly down the street.  The tension is palpable as the American colonists view the governor and his soldiers. Suddenly an old veteran, the gray champion, appears on the scene. Hawthorne describes his martial bearing, and “the solemn yet warlike peal . . . [of the man’s] . . . voice, fit either to rule a host in the battlefield or be raised to God in Prayer.”  He is dressed in “an ancient garb [that] could only belong to some old champion of the righteous cause.”  He challenges the governor and the procession stops. From horseback, a member of the procession scoffs, pronouncing the old man “some old round-headed dignitary, who hath lain asleep these thirty years, and knows nothing of the change of times[.] Doubtless, he thinks to put us down with a proclamation in Old Noll’s name.”  During the English Civil War, Royalists applied the epithet “Old Noll” to Oliver Cromwell.  The allusion to the haircut is also plain. The old man is an exponent of the Good Old Cause of the Independents in the English Civil War.
The Gray champion denounces the Governor and his party, indicates that James II is no longer King in England, and promises that the Governor and his men are to be thrown into prison the next day. “Back!” he exclaims, “lest I foretell the scaffold!”
The story resolves accordingly. James II flees England, William of Orange replaces him on the throne, and meanwhile the governor of the colony, his administration, and his clergymen are thrown into prison. The story of the Gray Champion celebrates the Glorious Revolution and the ascension of William and Mary as the rebirth of the Good Old Cause. In this story Hawthorne is neither subtle nor ironic, and the closing lines of the tale are unequivocal:

His hour is one of darkness, and adversity, and peril. But should domestic tyranny oppress us, or the invader’s step pollute our soil, still may the Grey Champion come, for he is the type of New England’s hereditary spirit; and his shadowy march, on the eve of danger, must ever be the pledge that New England’s sons will vindicate their ancestry.

Posted by Carter Kaplan at 12:44 PM No comments:

Le Mans has been properly called the greatest racing film ever made. I recently viewed Le Mans because I am interested in the racing cars of the 1960s and early-70s. But of course this film is about more than just cars.

Racing was undergoing a significant transition in the late 60s and early 70s, and some of the key points of that transition are starkly evident in the film. The drivers, the cars and the sport had a spirit of individuality that is missing from today's racing. Although suicide machines by today's safety standards, in the history of racing the endurance cars of that period come closest to what we might call works of art. The Porsche 917K and the Ferrari 512S long tail are, in my opinion, the most exciting racing cars ever produced. With these two models Porsche and Ferrari had "maxed out" on the frontiers of brute power and good looks. In the wake of these machines, however, the science and the organization of motor racing was overtaken by safety, technology and bureaucracy. Auto racing lost much of the human element. Not only individual drivers, but racing teams themselves became obscured behind a patchwork of corporate logos, stickers and emblems. The spectacle of national colors in auto racing--green for British, red (Rosso Corsa) for Italian, blue for French, white and red for Japanese, white for German, etc.--would be replaced by the colors of multinational corporations; for example, Porsche in the orange and blue of Gulf Oil, as seen in the film. I think it's rather sad to see the greatest car in racing history painted in the colors of a gas station sign, although people have argued (and perhaps correctly) that the Porsche 917 looks very handsome in these colors. British driver Graham Hill was a significant pioneer of this transformation in auto racing finance, and those interested in pursuing this theme should begin with a review of his career, specifically his replacing the British racing green of his Lotus 49 with the red, gold and white of the Cut Leaf Tobacco company. In an act which surely eclipses his remarkable list of victories, Hill has the distinction of being the first driver to paint up his car like a pack of cigarettes. As the seventies wore on the cars would become billboards and the "bottom line" commercial attitude would prevail, eventually transforming auto racing into the vulgar corporate circus represented by NASCAR and F-1 today.

The film subtly documents some of the elements of the emerging corporate mindset: Steve McQueen sacrificing a win so that the "Gulf-Porsche" team takes first and second place, rather than taking first himself, which would have resulted in a second place for Ferrari. But of course we don't watch this film to study corporate history, but rather to enjoy great cars. 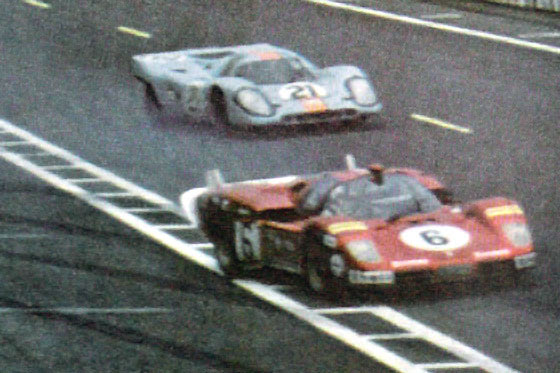 Posted by Carter Kaplan at 12:31 PM No comments: