A few lines from my Aristophanic comedy Diogones, forthcoming from Mustard Lid Press:

Lives in an aging vision that walks alone

In streams and in this life that came to seem

What is, the way it was, what should ever be

If I could sit in session with the wind

And call upon the outlines of that original vision

Have it before, unfolding grace, once more

I would say, "Slowly, linger with me awhile."

And a long gaze with time I should take

In all the fine array of what I should make

Of this gift, this beautiful friend who love herself

Did send singing out of the silent shrines of hope

"Wisdom, do you see?  Anointed, in a form soft,

Flowing, woman.  Friend, how can I friend to thee?"

And I should sit quiet and wait, a keen mind listening

And wait upon the long road of a languishing wave

Or as some mathematician tends upon the fortunes

Of a lonely comet rise and wane to the heavens

'Till midnight's last hour on western hill of sleep

I shall listen to the stillness of her breath, her sigh

Patient, upon a field of remembered expectation

Promise as this interview concludes, then dawn

This night wiser by one night, one still, one love

Posted by Carter Kaplan at 8:58 PM No comments:

I understand what happened, and how. And I understand why both countries, as well as the US, keep the locations and movements of these submarines secret even from one another. I suppose that the probability of such a collision taking place is quite small, but nevertheless, this whole affair seems to me to indicate that better co-ordination of the various allies might well be indicated.

The incident and the aftermath are almost humorous, if it were not for the specter of, "What would happen if they damaged each other so badly that there was a serious leak of nuclear material?"

I'm sure you are aware of the history of "live exercises" between the erstwhile antagonists of the Cold War. Sometimes, it could be like a game of "chicken" between the vessels of the US/UK/France and the old USSR or China or Korea. Very bizarre examples of what is sometimes called "brinkmanship."

Connected to all this, I will freely admit to a weakness for books that depict the situation of men in these extreme situations—at war, against environment, et caetera. Books of the Run Silent, Run Deep variety, as well as the book about the Shackleton expedition (Endurance) or the very odd The Long Walk all have their attractions.

Why are such books so interesting to some of us? I do not really know, but one speculates, of course. There is a lot of literature that dramatizes the "test" of man against obstacles of circumstance—war, hardship, and the like. It's a metaphor for life, and the hard choices that must be made, and the consequences that must be endured. Do we all, at some level, identify with the protagonists in these books? Hmm, I do not know. Perhaps.

Hemingway's For Whom the Bell Tolls certainly falls into this category, as do many other books and stories. Hemingway's book is sort of interesting because it depicts the character not just in a difficult situation, but in an impossible one, and one that he comes to recognize is doomed—yet feels compelled by various reasons to push on through to the end. People have, at various times, suggested that the theme is "existential." Ah, well, could be, but the whole thing grows out of Hemingway's view of the world and one's place in it, so I do not think it can fairly be called "existential" the way Camus's or Sartre's works are labeled thus. Hemingway had ideas about life, it's clear, but he never struck me as a "thinker," and to go to such writers looking for "deep thoughts" seems to me a problematic enterprise.

Writers who handle these subjects well present a situation and actions that stimulate us into near-endless meditation on the difficulties of life for which the fiction is a metaphor. I do not think that "good" books provide ready-made answers to questions and problems dealt with this way. It's probably enough—and better—to  dramatize the conflicts and problems that arise when people must make hard choices in the face of difficulties and conflict. The reader brings a certain amount of understanding (one hopes) to the reading table, and can do the rest.

Along this line, let me point out a book I read some years ago that I found to be an excellent example of this style, done in novelistic form. The book in question is called Wilderness, and it was by Gerald Hausman and the late Roger Zelazny. Nicely written, and a fascinating read overall; and I never even really had much interest (before reading the book) in the milieux depicted.

Posted by Carter Kaplan at 7:09 PM No comments:

This is a link to the Alaska Volcano Observatory webcams. There are two webcams--"Hut" and "CI"--currently viewing Mt. Redoubt as it gets ready to erupt: 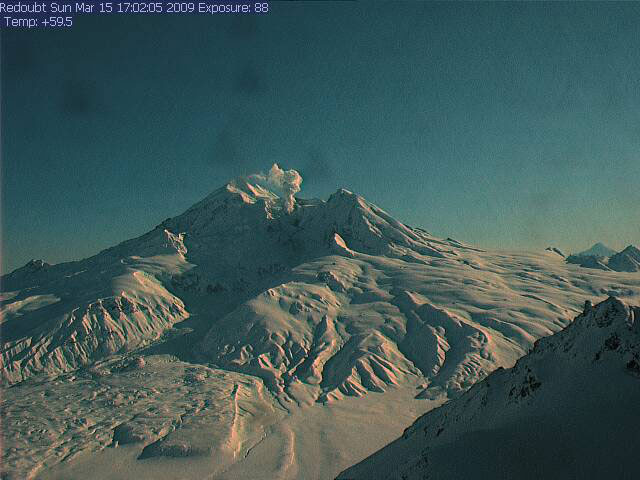 Posted by Carter Kaplan at 11:19 AM No comments: