"On June 14, SpaceX's Grasshopper flew 325 m (1066 feet)--higher than Manhattan's Chrysler Building--before smoothly landing back on the pad. For the first time in this test, Grasshopper made use of its full navigation sensor suite with the F9-R closed loop control flight algorithms to accomplish a precision landing. Most rockets are equipped with sensors to determine position, but these sensors are generally not accurate enough to accomplish the type of precision landing necessary with Grasshopper."
SOURCE
Posted by Carter Kaplan at 12:20 PM 1 comment:

Raquel Welch staring in "The Return of Mary Make-Believe"

Click HERE to learn more about Mary Make-Believe and her friends.
Posted by Carter Kaplan at 12:19 AM 4 comments:

Ancient of Days with Tessa B. Dick

I am happy to announce the new radio show Ancient of Days with Tessa B. Dick, Mondays at 3 p.m. Pacific, 6 p.m. Eastern, and 11 p.m. Greenwich.   The show explores the ways ancient myths and legends are rooted in actual history. This evening's show explores the origins of the story of Oedipus. 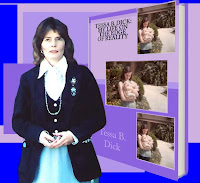 Click HERE to listen to the live stream under the (temporary) show name "Crystal Clear."  To listen by phone or to call in with questions to the host, dial (347)324-3704.

Thunderchief Emergency Departure over Gulf of Tonkin, Another View

Yesterday I posted Joe Kline's clever photoshop image of Ed Larson and Mike Gilroy ejecting from their stricken F-105 Thunderchief over the Gulf of Tonkin after sustaining hits from three SAM missiles and 57mm AA fire. Joe used a 1/72 scale model as the basis for the image.

Commissioned by Mike Gilroy, Joe has made a painting of the event as seen from the altitude of the aircraft, and here it is:

Other Highbrow posts on the F-105 Thunderchief can be viewed here and here.

"Watch your six!"
Posted by Carter Kaplan at 4:03 PM No comments: 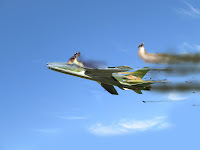 "Ed Larson and I departing A/C 358 on 7 August 1966 over Gulf of Tonkin. Hit by the third of three SAMs, blew canopies and flew for another 15 minutes until hit by 57mm crossing the coast line. Airplane blew up shortly after ejection. Photo by Joe Kline."  Author and source:  Mike Gilroy, facebook.

Posted by Carter Kaplan at 3:47 PM No comments:

In response to Dario's comment concerning yesterday's Highbrow post, here is another passage in Moby-Dick representing Melville's Gnostic speculations. This is from chapter 66, "The Shark Massacre". A number of sharks--which  have been attacking and devouring a whale tied to the side of the ship--begin to devour each other:


They viciously snapped, not only at each other’s disembowelments, but like flexible bows, bent round, and bit their own; till those entrails seemed swallowed over and over again by the same mouth, to be oppositely voided by the gaping wound. Nor was this all. It was unsafe to meddle with the corpses and ghosts of these creatures. A sort of generic or Pantheistic vitality seemed to lurk in their very joints and bones, after what might be called the individual life had departed.

A shark is hoisted on board in order to skin it, and it nearly takes off Queequeg's hand.  The harpooner responds:


“Queequeg no care what god made him shark,” said the savage, agonizingly lifting his hand up and down; “wedder Fejee god or Nantucket god; but de god wat made shark must be one dam Ingin.”

Clearly, an expression (however humorous) of the Gnostic worldview.

Posted by Carter Kaplan at 2:09 PM No comments:

I admit to indulging an on-going enthusiasm for the following lines from Herman Melville's Moby-Dick.  The effect is humorous, but nevertheless the language embodies a political statement that is vaguely paleoliberal in nature, with post-Calivinist and Gnostic overtones:


Long exile from Christendom and civilization inevitably restores a man to that condition in which God placed him, i.e. what is called savagery. Your true whale-hunter is as much a savage as an Iroquois. I myself am a savage, owning no allegiance but to the King of the Cannibals; and ready at any moment to rebel against him.

--Herman Melville, Moby-Dick, Chapter 57, "Of Whales in Paint; in Teeth; in Wood; in Sheet-Iron; in Stone; in Mountains; in Stars"

The Yuko Nii Foundation has announced that Cambridge University Press has selected one of Terrance Lindall's Paradise Lost paintings for the cover of the forthcoming Cambridge Companion to Paradise Lost, edited by Professor Louis Schwartz.

In 2012, Lindall completed work on a hand-embellished book of Paradise Lost illustrations, with 23.75 carat gold leaf borders.  The Elephant Folio, as it is called, will be on display at the Williamsburg Art & Historical Center during the Brooklyn Book Festival, September 21-22, 2013.

Horace Jeffery Hodges' novella The Bottomless Bottle of Beer is now available on Kindle.  Professor Hodges' novella was originally published in the International Authors anthology Emanations: Second Sight, and features illustrations by artist and philosopher Terrance Lindall. These illustrations (and many more) are in the new Kindle edition. A full announcement has been posted in Professor Hodges' blog, Gypsy Scholarship.

Italian artist, translator, critic, and poet Dario Rivarossa has been working steadily on his translation of Torquato Tasso's poems La Gerusalemme liberata (Jerusalem Delivered) and Gerusalemme Conquistata (Jerusalem Conquered).  Sections of the translation will appear soon in Emanations: Third Eye. This remarkable effort includes preparing illustrations rendered in a contemporary style that is influenced by Japanese anime. As he works on Tasso's poems, Mr. Rivarossa is documenting his engagement with the creative process in his blog Tassonomia.  Mr. Rivarossa is the author (and illustrator) of the book-length critical study Dante Was a Fantasy Writer.
Posted by Carter Kaplan at 1:11 PM 2 comments:

The Witch of Agnesi

Posted by Carter Kaplan at 1:20 AM No comments:

On the Set of Surrealmageddon


How could we say no?  We were dealing with a subliminal suggestion to film a stop motion "interpretation" of  Bienvenido Bones Bañez Jr's  Surrealmageddon Art World Manifesto.

First, we needed a set.  Here's the back of the sound stage:


The view from the parking lot :


A couple of actors out on the patio with a Brooklyn Wild Hound dining on pickled pterodactyl.  Looks like Terrnace Lindall, elder statesman of Williamsburg surreal consciousness, and Brooklyn sharpshooter Brittany Natale, contributing writer to Bushwick Daily, and special assistant to Yuko Nii, Williamsburg philanthropist, international ambassador of good will, and patroness of the arts. Yes!  Precisely the kind of talent producer Bañez is looking for:


While Ms. Natale works the Brownie, producers Dr. Highbrow and Professor Lindall hammer out the deal:


Places everyone!  Get the Wild Hound inside, and let's cook up a script! 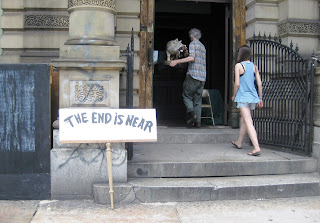 Testing the script on the focus group:


It all begins with a fashion statement:


Actors preparing for the "Big Meeting with the Technical Advisor" scene:

In true highbrow art there is never any resolution, but there can be charisma masquerading as profound insight:


Submissions are in and the production process has begun.  Emanations: Third Eye should be available in mid-August. 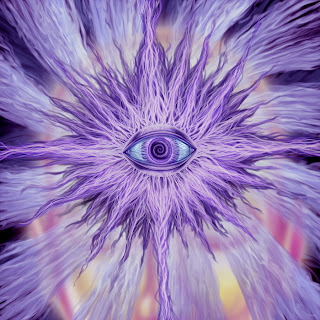 Effects of Education by Gender

Quantum Engines Must Break Down 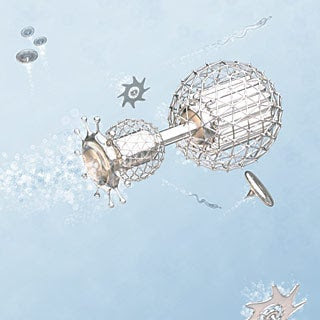 Posted by Carter Kaplan at 7:36 PM No comments: