In large part philosophy is a political discussion among schoolmen, significant only so far as some of these people variously work for government, civil service, industry, or play the role of intellectual celebrity. They also influence young matriculants (improperly called "students"), though most young people aren't listening. Meanwhile, the metaphysical problem is solved, that is "We really haven't got a clue, so we should do well to advance our convictions with a great deal of careful thought." Which itself is a political statement embedded into the core of western civilization, from St. Paul to Wittgenstein, though most are oblivious to this understanding.

Let's think about this statement. Do I really mean what I'm saying here?

Suffice it to say substituting the word "philosophy" with "schoolmen's conversation" brings some interesting things to the surface.
People who come from the outside--Nabokov, Melville, Hawthorne, Milton, Orwell, C.S. Lewis (yes, he is a schoolman but his field is literature and his thinking is shaped by his theological concerns)--are in a position to see "philosophy" as just that. That is, as "a conversation." How did Wittgenstein come to this understanding? He was of course from "out there" as well. Way out there. His genius was that he insinuated this understanding into the schoolmen's conversation. And of course we have the phenomenon of Plato, as crafty and as elusive as he is brilliant, writing dialogues. And there is further irony in this, too, as Plato represents our quintessential schoolman, always playing his cards close to his chest, and never showing outsiders the secret handshake.
Posted by Carter Kaplan at 11:39 AM No comments: 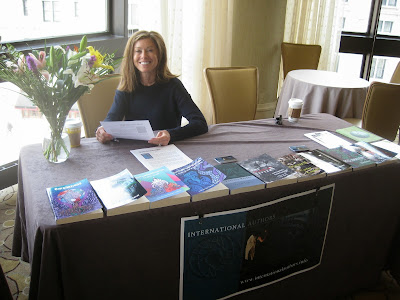 This past weekend, International Authors books were on display at the American Literature Association Conference in Boston.

At the conference I read a paper on "The Place of American Literature in Emerging Global Anglophone Culture." My talk featured the responses of many International Authors people, who sent me their reflections on their experience with American literature in their countries.  Dario Rivarossa (Italy) and Michael Butterworth (UK) are no strangers to Highbrow readers.  Here, beginning with Dario, are their statements as I included them in my talk:


As for my readings in American literature, I usually start by being fascinated by an author, then try to read everything he wrote, possibly in English.

The first American writers I happened to meet and love as a teenager were Poe (my father had a couple of anthologies), Melville (Moby-Dick), and H. P. Lovecraft—probably the very first author of whom I bought the Complete Works in English, some years later.

The most interesting feature of great American literature, especially seen from old Italy, is its modernity. US authors dealt with the now-ubiquitous lifestyle with its technology, Stock Exchanges, “melting pots,” etc., when our writers still offered Romanticized and twisted versions of our “glorious” past.

Moby-Dick, first translated by Cesare Pavese in 1932, was a cultural shock and a breath of fresh air in then Fascist Italy: a new kind of Epic, powerful adventure, thrilling characters…

I first heard about the novel when I was a child. My grandmother, speaking of the Gregory Peck movie she had just watched on TV, told me about “the White Whale.” I was so fascinated by that concept that I almost immediately drew it, without any further data; in fact, I drew a standard whale, nor the sperm kind. I also made comic stories with a combative whale as the hero.

In Italian high schools, as far as I know, basically Melville, Poe, and Faulkner are anthologized. Poe is still interpreted according to the very restrictive Mauditistic key provided by Baudelaire, who first “imported” his works to Europe.

As a footnote to Mr. Rivarossa’s identification of modernity as a defining feature of American literature, I shall cite a remark by British author and publisher Michael Butterworth, whose career in writing began in the 1960s with New Worlds magazine. He writes: “Americans just seem more contemporary and immediate in their style, more relevant to the age in which we grew up in terms of their concerns. We grew up looking at the import bookshelves. This applied to both fiction and graphics. In the 50’s and 60’s, America was the future. Of English writers only J.G. Ballard and Michael Moorcock seemed relevant, and they were both inspired by William S. Burroughs.”

Yesterday I posted on Devashish Makhija's chidlren's book, When Ali Became Bajrangbali. Here is his statement from the paper:


In India, you encounter different curriculums in different cities since every state speaks a different language and has a different education board. Since I’m from Calcutta, I’ll speak for that city. Interestingly at a school/college level, we were not exposed to any American literature. All writing in English we read has been Indian or British.

The only thing we’ve been exposed to in those years that was American was a thick diet of American cinema (as was the rest of the world I presume).

But as I grew up I’ve discovered (of my own accord) some writers, from Twain (foremost) to Elmore Leonard (yes, that wide has been my spectrum).

If left to me (being brutally honest) I wouldn’t prescribe any American literature. India is a very very confused country. Within our own geographical boundaries we speak 28 official languages and over 300 unofficial ones—dialects mostly. And almost none of this is represented in our curriculum. We still haven’t been able to shake off the British yoke in our education system. Introducing some American prose in there will make us even more disconnected from our roots. Many local literatures are now being translated into English and I’d vote for those instead. But that’s only my point of view on the matter.

Altogether, it was a terrific conference. Many thanks to Ms. Martel for helping with the International Authors display.
Posted by Carter Kaplan at 11:29 AM No comments:

When Ali Became Bajrangbali by Devashish Makhija and illustrated by Priya Kuriyan is available from Tulika Publishers, please click HERE.
Posted by Carter Kaplan at 11:30 AM No comments:

Dario Rivarossa has sent me his drawing of Poe's Red Death rendered as, ahem, a superhero! 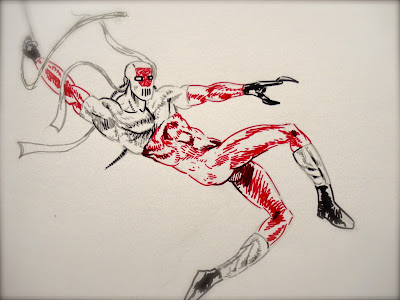 A concept worth considering.
Posted by Carter Kaplan at 10:30 PM 6 comments:

Comet Lovejoy and the Pleiades

-- Kepler (quoted in The Anatomy of Melancholy)

Posted by Carter Kaplan at 11:36 PM No comments:

Please click HERE for a cleverly illustrated article on the nature of wifi radiation. The effects of long-term wifi exposure are still unknown...

As one great furnace flamed, yet from those flames
No light, but rather darkness visible

Posted by Carter Kaplan at 12:43 AM No comments:

A Defense of Elected Legislatures

In "A Defense of Poetry" Shelley famously concludes, " Poets are the unacknowledged legislators of the World." An apt observation, and students can argue this all over the place in interesting and useful ways, but at one point in that discussion someone must ask, "But aren't laws written by elected legislatures?"

Elizabeth Anscombe on Kant comes to mind.  Here is a passage from her paper on Modern Moral Philosophy:


Kant introduces the idea of “legislating for oneself,” which is as absurd as if in these days, when majority votes command great respect, one were to call each reflective decision a man made a vote resulting in a majority, which as a matter of proportion is overwhelming, for it is always 1-0.  The concept of legislation requires superior power in the legislator.

Kant believes that his principles of  universalizability and the categorical imperative produce rules that are better than laws written by legislatures.  In one reading of Shelley's conclusion, it would seem that Shelley similarly believes that poets could write better laws than legislatures.  Yes, this is being somewhat unfair to Shelley, but the idea that individuals, scientists, technocrats, "inspired" people, and so on, can write better laws than elected representatives enjoys great popularity these days.  Compare John Rawls, whose "original position", "veil of ignorance" and the test (like Kant's categorical imperative) of "social justice" can provide a methodological apparatus for replacing legislatures with experts.
Posted by Carter Kaplan at 12:33 PM No comments:

Posted by Carter Kaplan at 4:33 PM No comments: 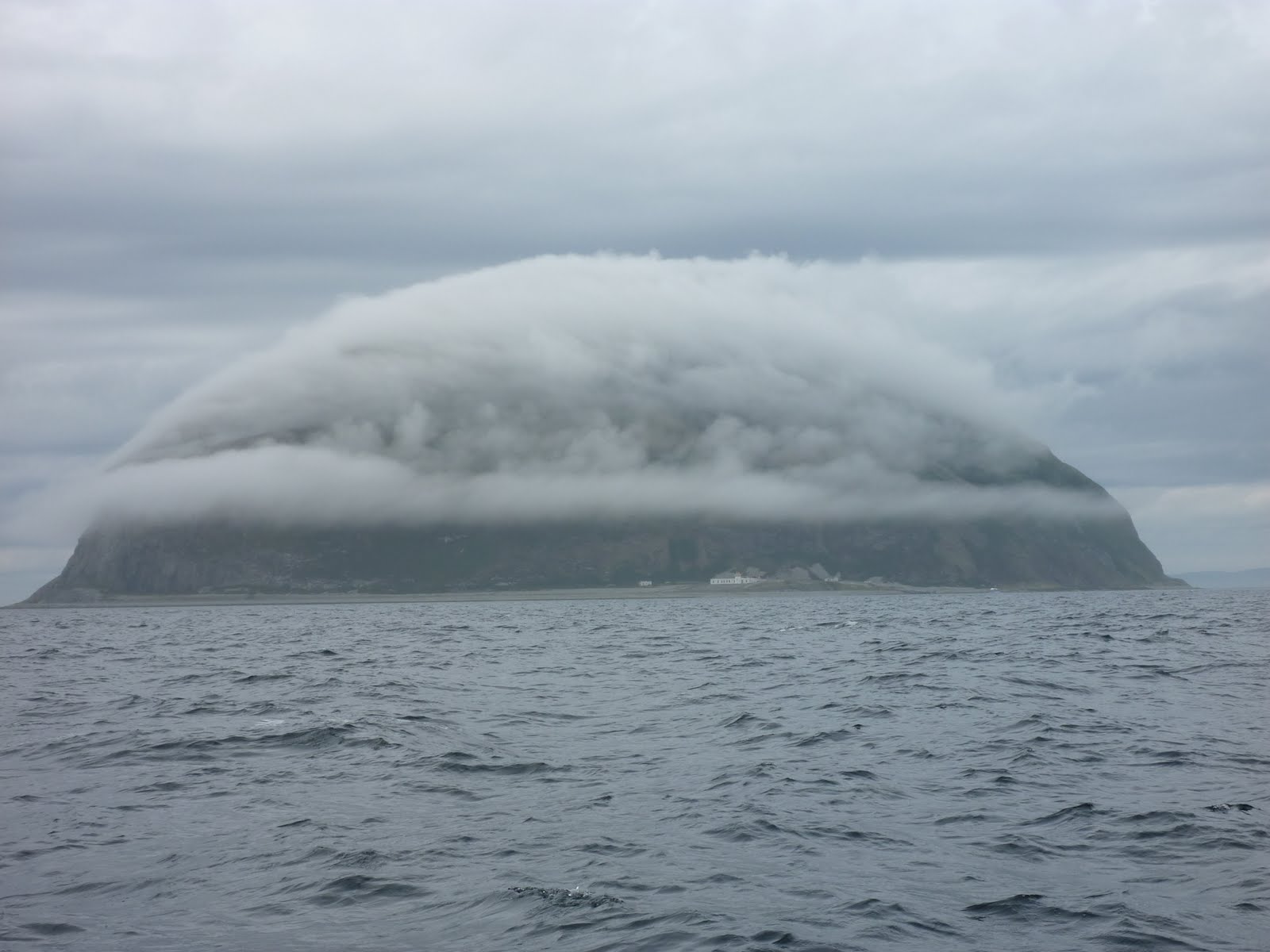 Please click HERE for a note on Herman Melville's analysis.


Posted by Carter Kaplan at 5:19 PM No comments: