Be not afeard; the isle is full of noises,
Sounds, and sweet airs, that give delight and hurt not.
Sometimes a thousand twangling instruments
Will hum about mine ears; and sometime voices
That, if I then had waked after long sleep,
Will make me sleep again; and then in dreaming,
The clouds methought would open, and show riches
Ready to drop upon me, that when I waked
I cried to dream again. 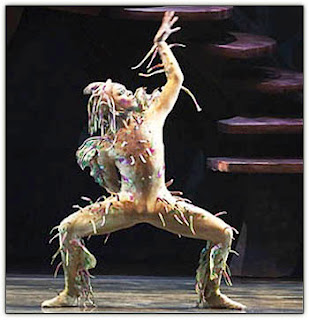 Posted by Carter Kaplan at 10:50 PM No comments:

George Orwell on That Hideous Strength

I was looking around the internet and found George Orwell's brief but fascinating review of That Hideous Strength, a dystopian novel by C.S. Lewis. Orwell is convinced by the basic premise of the book:


A company of mad scientists – or, perhaps, they are not mad, but have merely destroyed in themselves all human feeling, all notion of good and evil – are plotting to conquer Britain, then the whole planet, and then other planets, until they have brought the universe under their control.

All superfluous life is to be wiped out, all natural forces tamed, the common people are to be used as slaves and vivisection subjects by the ruling caste of scientists, who even see their way to conferring immortal life upon themselves.

According to Orwell, “There is nothing outrageously improbable in such a conspiracy,” adding that he “could recommend this book unreservedly” but for the fact the supernatural element in the story “keeps breaking in, and it does so in rather confusing, undisciplined ways.” Orwell concludes:

[Lewis] is entitled to his beliefs, but they weaken his story, not only because they offend the average reader’s sense of probability but because in effect they decide the issue in advance. When one is told that God and the Devil are in conflict one always knows which side is going to win. The whole drama of the struggle against evil lies in the fact that one does not have supernatural aid.

These are terrific lines. Indeed, Orwell’s statements regarding the material and worldly nature of the “struggle against evil” shimmers, or so it seems to me, with a luminescence that is itself weirdly eerie.
Posted by Carter Kaplan at 3:15 PM 1 comment: