Something's going on with the prefix "Max," as just recently I received two communications that signify in possibly interrelated ways. The first concerns a message from my publisher offering the use of "Maxim" next time I visit London. "Maxim DeWinter (Daphne Du Maurier)" is his Citroen 2CV Lomax:

The second "Max" communication I received is an image passed along by a friend, whose daughter "Maxine" gives me a mention in this page from her illuminated memoirs: 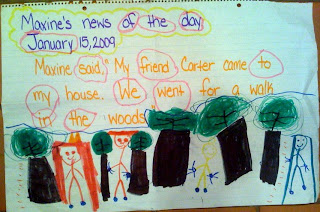 This bodes well.
Posted by Carter Kaplan at 8:39 PM No comments:

Critical Commentary with the Ouija

The other evening I paid a call upon my astrologer, who after following the usual preliminaries--heating a pot of chamomile tea, vigorously rubbing my shoulders, burning white sage, and with much fanfare striking a gong--pulled out her Ouja board to survey a variety of notable historical figures concerning the critical reception Tally-Ho, Cornelius! was receiving on "the other side." Demons are known to impersonate the shades of the dead in order to corrupt our world with fantasy and illusion, and thus I can not attest to the veracity of these statements, but they ring true to me:

"Cast this reactionary drivel to the flames. Then everybody
back to work."
--Mao Tse Tung
"The story of a vicar whose best friend is a cuttlefish. We all
know someone like that."
--Evelyn Waugh
"I would like to have dinner with the author. There can
be no higher praise."
--James Boswell
"With delight and ease this novel exposes such people as have betrayed their civilization and all mankind; and especially that terrible species we know as the 'political scarecrow,' that is the man of straw, ridiculous to all who know of what materials he is made; and to none more so, than to those who have stuffed him, and set him up, as the Priapus of the garden of the golden apples of corruption."
-- Thomas Love Peacock
"Perfectly esoteric!"
--Leo Strauss

Posted by Carter Kaplan at 6:50 PM No comments:

In his seminal book on The Ideological Origins of the American Revolution, Bernard Bailyn identifies five currents of thought that were significant to forming the world view of the colonists who struggled against the British Empire. The initial four are as follows: first, “the heritage of classical antiquity;” second, the “ideas and attitudes associated with the writings of Enlightenment rationalism;” third, the tradition represented by English common law; and, fourth, the “political and social theories of New England Puritanism.” However, according to Bailyn,

important as all these clusters of ideas were, they did not in themselves form a coherent intellectual pattern, and they do not exhaust the elements that went into the making of the Revolutionary frame of mind . . . The ultimate origins of this distinctive ideological strain lay in the radical social thought of the English Civil War, and of the Commonwealth period.

Bailyn goes on to say that the permanent form of the American revolutionary world view had fully formed by the late-seventeenth and early eighteenth-centuries. Interestingly enough but not surprisingly, Milton figures significantly as a progenitor of this opposition theory. If this is true, the American Revolution is properly an outcome of radical “poetical” processes of late-Protestant thought. In more modern terms, this revolutionary mindset is characterized by patterns of investigation sharing close affinities with analytic philosophy and critical synoptics. Before, however, analytic and synoptic perception is possible, thought has to be set free to range beyond the limits of custom and conventional knowledge. Bernard Bailyn. The Ideological Origins of the American Revolution. (Cambridge: Belknap Press of Harvard University Press, 1992).

Posted by Carter Kaplan at 3:44 PM No comments: