I just heard from L. Sterns Newburg, who advises me that he has revised his Amazon review of the International Authors translation of Torquato Tasso's Creation of the World.

An impressive piece of scholarship, and a valuable practical document for those interested in the great Italian poet, Torquato Tasso. This is a translation of Tasso's Il Creato Mundo, and the translators have been faithful - I want to say "lovingly faithful" - to the spirit and the words of the original. Tasso's original is in some ways an eccentric performance, so this translation presented numerous technical challenges, most of which have been surmounted.

The most difficult part of Tasso to recreate in English is the music of the original Italian. Any translation from a Romance language to English that somehow recreates such music engaged in a species of legerdemain, and inevitably, it results in subtle departures from sense of the original. The translators did not attempt to recreate Tasso's music.

Tasso cannot, perhaps, really speak to us in English, but the able translators have given us something far superior to a mere crib. Bravissimo!

Tasso's reputation in English-speaking countries has mutated over the years. Tasso influenced not only Milton, but Edmund Spenser and Samuel Daniel. He was at one point one of the luminaries of world literature, and after Dante, people tended to discuss Tasso and Ariosto. Something happened in the 19th Century, I gather, and their reputation outside Italia declined. Also, the later work of Tasso is somewhat problematic because he seemed desperate to conform to religious requirements as seen according to the lights of the Counter-Reformation. Alas.

His lyrics, his play Aminta, and Jerusalem Liberated are all very important, but the legend of Tasso as time went on exerted as much influence as the man's work. Leopardi wrote a fictional dialogue between Tasso and his "familiar spirit," and Goethe wrote a famous play. There are other uses of his personal history-as-mythology. It's almost the way Chatterton's life gets used.

This translation could help in a revaluation and understanding of this significant poet, something that is overdue.

To visit the Amazon sales page for Creation of the World, please click HERE. 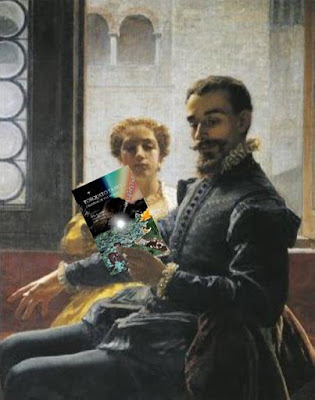 Posted by Carter Kaplan at 2:39 PM No comments: 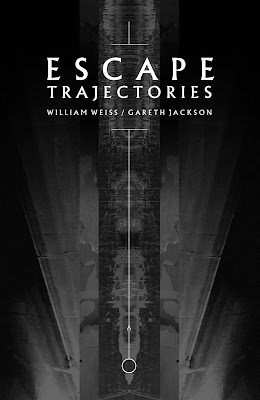 Posted by Carter Kaplan at 4:17 PM No comments:

JART8th at the WAH Center

JART is an ongoing annual exhibition curated and produced by Hiro Shiraishi of Pepper Project, a Tokyo-based art group, and hosted by the not-for-profit WAH Center (Williamsburg Art & Historical Center) in Brooklyn, New York. It is held every March around the time of The Armory Show, one of the biggest Art Fairs in the U.S. The aim of the JART show is to introduce a new wave of young emerging Japanese artists from Tokyo in collaboration with the New York Japanese artists, bridging these metropolises and their respective art worlds and linking these geographically disparate artists together in one show. This year, JART is celebrating its 8th year, presenting a program consisting of all genres of art, including painting, wood-block printing, photography, contemporary craft-making, installation, and animation.

In late October 1996, Yuko Nii founded the non-profit The WAH Center (Williamsburg Art & Historical Center) based upon her Bridge Concept. That concept envisions a multifaceted, multicultural art center whose mission is to coalesce the diverse artistic community, and create a bridge between local, national and international artists, emerging and established artists, and artists of all disciplines. Thus through the international language of art we come to understand each other to create a more peaceful and integrated world. The WAH Center is a force for peace and understanding and its concept is incorporated in its acronym: “WAH” in Japanese means “peace” or “harmony” or “unity”.

Gallery Hours: Thursday – Monday, 12pm to 6pm
(except on the opening day)

Posted by Carter Kaplan at 9:06 PM No comments:

Between the Empire Room and the Library at the Williamsburg Art and Historical Center, there is a new period room with objects from the 16th to 19th centuries. It is guarded by a 19th century carved and painted sculpture called the "Grand Nubian."  April will feature a special luncheon and dinner, and guests will be escorted through the many treasures held in the Yuko Nii Foundation and WAH Center collections. Dinner tickets $500, limited to 20 tickets. Info: milton@wahcenter.net
Posted by Carter Kaplan at 6:53 PM 1 comment:

"The Estuary" by Clark Ashton Smith 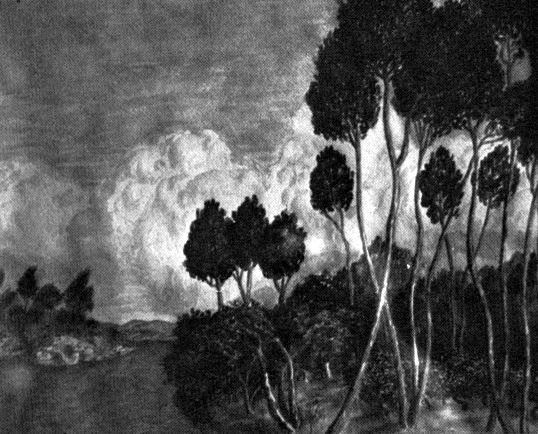 Smith is not without a following, though he remains an obscure figure. To learn more about him, please click HERE.
Posted by Carter Kaplan at 5:35 PM No comments:


Posted by Carter Kaplan at 1:44 PM No comments:

The Desire to Create 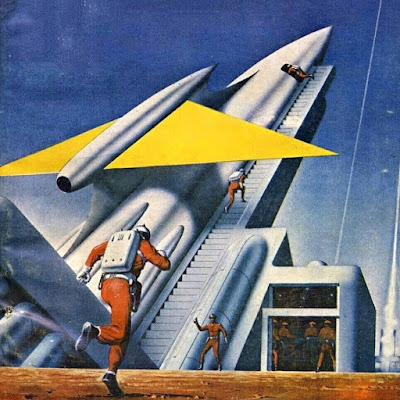 Posted by Carter Kaplan at 1:55 PM No comments:

Do you know the difference?
Posted by Carter Kaplan at 2:58 PM No comments:

S is for Space

I first read Ray Bradbury in the Caribbean, when I was 12. The book was S is for Space, and thinking now of Bradbury's books, I regard it as presenting the best of his short stories. It was a nice discovery down there on Carriacou, where I lived one summer with a group of Canadian marine biology students. It was a British Commonwealth edition of the book meant for distribution to the UK, Canada, Australia, New Zealand, and South Africa, and seeing that list of countries on the back cover certainly added to the sense of "otherness" which characterized my experience there--and at present I am somewhat amused thinking of myself on that island doing as I pleased, a sort of "Aristotle, Jr." in his own private Atarneus. The cover was pretty good. 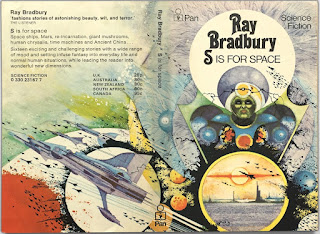 Posted by Carter Kaplan at 7:02 PM No comments:

Professor Hodges on Emanations: I Am Not a Number

Yesterday, Jeffery Hodges blogged on Emanations: I Am Not a Number, which, after a  protracted voyage, has reached Korea.  Please click HERE to see Jeffery's initial impressions.  Today, he writes on Richard Kostelanetz's contribution, "Epiphanies." Please click HERE.
Posted by Carter Kaplan at 2:21 PM 1 comment:

Aristotle and the meaning of Eudaimonia

When Aristotle discusses Eudaimonia, we will find it beneficial to consider that his notions compare closely to what Jefferson is suggesting by Happiness in The Declaration of Independence.  Eudaimonia doesn't translate directly to Happiness, but a consideration of the Lockean discussions that give the Declaration its context, suggest that in this matter Jefferson does indeed sympathize closely with Aristotle.

In the following passage, Anthony Kenny characterizes the concept of Eudaimonia in Aristotle's Nichomachean Ethics and the Eudemian Ethics:

In Book X [of the Nicomachean Ethics] Aristotle finally answers his long-postponed question about the nature of happiness. Happiness, we were told early on in the treatise, is the activ­ity of soul in accordance with virtue, and if there are several virtues, in accordance with the best and most perfect virtue. Now we know that there are both moral and intellectual virtues, and that the latter are superior; and among the intellectual virtues, understanding is superior to wisdom. Supreme happiness, then, is activity in accordance with understanding; it is to be found in science and philosophy. Happiness is not exactly the same as the pursuit of science and philosophy, but it is closely related to it: we are told that understanding is related to philosophy as knowing is to seeking. Happiness, then, in a way which remains to some extent obscure, is to be identified with the enjoyment of the fruits of philosophical inquiry.
To many people this seems an odd, indeed perverse, thesis. It is not quite as odd as it sounds, because the Greek word for happiness,’eudaimonia', does not mean quite the same as its English equivalent, just as 'arete’ did not mean quite the same as virtue. Perhaps 'a worthwhile life' is the closest we can get to its meaning in English. Even so, it is hard to accept Aristotle’s thesis that the philo­sopher's life is the only really worthwhile one, and this is so whether one finds the claim endearing or finds it arrogant. Aristotle himself seems to have had second thoughts about it. Elsewhere in the Nicomachean Ethics he says that there is an­other kind of happiness which consists in the exercise of wisdom and the moral virtues. In the Eudemian Ethics his ideal life consists of the exercise of all the virtues, intellectual and moral; but even there, philosophical contemplation occupies a dominant position in the life of the happy person, and sets the standard for the exercise of the moral virtues.

Both of Aristotle's Ethics end on this exalted note. The contemplation commended by the Nicomachean Ethics is described as a superhuman activity of a divine part of us. Aristotle's final word here is that in spite of being mortal, we must make ourselves immortal so far as we can.

Please click HERE for more on how Locke fits into this discussion.
Posted by Carter Kaplan at 10:02 PM No comments: