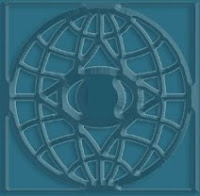 Posted by Carter Kaplan at 1:12 PM No comments:

Our expectations descend through chasms of arcane wonder, where the Internet shapes marvelous new communities, even as the Academy breaks the chains of worn convention and formal discipline, sending forth a new class of scholars to explore the frontiers of unique realms. Amidst this progress, strangely enough and yet quite appropriately, consciousness rebels. In these pages are stories, poems, and essays that are exuberant, eloquent, and original—where expression and intelligence commingle in a flash of awakening. Whether this new consciousness is human or perhaps something greater remains to be seen, but by looking into our emanations we might find an answer.

The first anthology to be released by International Authors, Emanations showcases the work of sixteen writers from around the world. With illustrations by Kai Robb, Dario Rivarossa and Vitasta Raina.
Click here to order.
Posted by Carter Kaplan at 11:33 PM No comments: 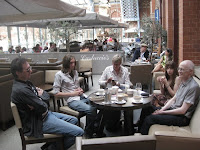 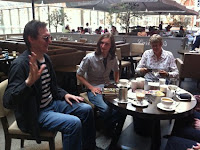 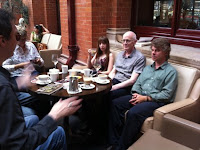 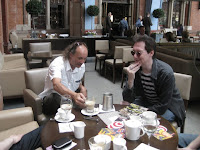 On July 31 I met in London at the St Pancras Hotel with several of the UK members of International Authors. In attendance were Ruud Antonius, Steve Aylett, Hayden Westfield-Bell, Sara Butterworth, Michael Butterworth, Elkie Riches, and myself.

The meeting was enjoyable, and as we gathered together I felt a sense of shared ease and genuine warmth. Perhaps the most "official" proceeding was summarizing a message Michael Moorcock sent us. After greeting the attendees and expressing his wish to be there, Mr. Moorcock writes:

"Really would like to be there, particularly to meet those people I haven't yet met face to face. I am a bit of a softy around such ideas as a multicultural congress. I hadn't really thought about it before but Norman Spinrad brought up the thought that New Worlds had been a genuinely transatlantic venture with Americans coming to the UK specifically because NW was there. Part of the ideal was to have Anglophone writers, at very least, exchanging cultural influences. I'd still like to see a few more Indians, say, involved."

This is interesting to me as I belive Emanations (and International Authors) is both an endorsement of Mr. Moorcock’s suggestion and a response. Vitasta Raina's Writer's Block is a case in point: an endorsement, of sorts, and a response to multiculturalism. I think we are at a point where the “multiculturalism project” of the last century is unexpectedly (but properly, surely) transforming into a more complex transmodern experiment, and I think readers will agree when they see how the various pieces collected in Emanations reflect upon each other.

Back to the meeting: It was relaxed and convivial. We certainly “talked shop” but what I got out of it was more the feeling of being with kindred spirits. Topics we discussed: (mis)adventures in publishing, the technology of book production, recent accomplishments, International Authors, Emanations. I was happy that Dutch surrealist painter Ruud Antonius was there—people from different media mixing together and comparing notes can only be good. Cross fertilization, so to speak. And Ruud is at work on a novel, incidentally.

I showed Michael Butterworth a proof copy of Emanations, and he was quite surprised to see that in addition to his long story, many of his poems are in the anthology. For a moment I was concerned that I had misunderstood his sending them to me, but then he expressed his satisfaction (and happy surprise) that the poems had been included. Also, I was very glad to see how happy he was with the illustration that Vitasta Raina has prepared for his story.

We spent a long time together, but as people began leaving, I felt a bit frustrated. I could have sat there all night! As a matter of fact, Ruud (my host in London) and I were up talking that evening past 1:00 a.m.
Posted by Carter Kaplan at 11:20 AM 3 comments: