"I was the Hottest Fighter-Bomber Commander in the Air Force" 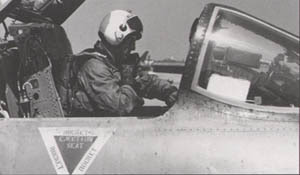 I recently finished Going Downtown: At War with Hanoi and Washington by Col. Jack Broughton.

Several years ago I read Col. Broughton's Thud Ridge and since then I’ve wanted to pick up this book to learn more about the Turkestan incident and Broughton’s court martial. Two of his men flying F-105 Thunderchiefs had fired in self-defense upon the Russian cargo ship Turkestan in Haiphong Harbor, a breach of the Rules of Engagement, and to protect them Broughton destroyed their gun camera film. As Broughton reports, General John D. Ryan, a gruff and ambitious SAC uber-boss who eventually made Air Force Chief of Staff, pulled strings throughout the Pacific to railroad Broughton on the charge of conspiracy against the United States Government (the court martial eventually fined Broughton $40 for destruction of government property). Meanwhile, around this same time several Navy pilots breached the rules of engagement in a similar scenario. When Washington complained the Navy responded, "Leave us alone, we’re fighting a war!" and the matter was dropped. Evidently the Air Force wasn't as loyal to its troops as the Navy; and indeed Broughton makes a point of arguing that this was the kind of loyalty that marked the Air Force of the past. Such loyalty to his troops (one of whom, flying as his wingman, had saved Broughton's life over Hanoi) was what led Broughton to destroy the gun camera film. As Broughton points out, however, several weeks previous to Turkestan while visiting his family in Hawaii he had come to an unsettling conclusion over his frustration with Washington and its mishandling of the war. He writes, "I was looking for a fight."

Going Downtown is the story of bureaucracy and the ruthlessness of ambitious men, of top-down administration and inept national policy. Broughton advances a pretty credible argument that such a system was destructive not only to its stated goals (which were ambiguous at best, mere political expedients as protean and shifting as the political winds) but also destructive of its very best people. Broughton exclaims with mixed pride and dismay as he watches his career disintegrate, "I was the hottest Fighter-Bomber commander in the Air Force." Reading his story, I believe him. Broughton is the very template of intelligence, competence, honesty, dedication, raw guts and integrity. When confronted about the whereabouts of the film he does not equivocate. He stands his ground and states, "I destroyed it!"

Going Downtown is an angry book, and not only is that anger rooted in feelings of righteous indignation, but there is also something of the old hunter in there, which is a potent force indeed. I am struck both by Broughton’s gung-ho attitude and the counterpoint of Air Force and Washington politics. While I am in sympathy with Broughton’s criticisms of Johnson and McNamara, who he flipantly refers to as "Lyndon" and "Robert," I am also leery of Broughton’s mindset, which is after all that of a professional soldier. There is to me something incompatible between that professional mindset and what I believe American political culture is supposed to be about. The irony, perhaps, is you can’t operate complex weapons systems like the Thunderchief with citizen amateurs, but you also can’t have a democratic country along the lines of the American model with a military as professionalized as we had then (and have today).

Strike that. You can operate Thunderchief wings with citizen amateurs, but you can’t get citizen amateurs to follow bad policies formulated by people like McNamara and Johnson.

The type of military that fought WWII was a thing of the past by Vietnam. Broughton and the operations people at that time were more in step with that WWII mindset than the professional machine that Johnson and McNamara exploited (and in the case of the Thunderchiefs and their crews) almost completely destroyed. Broughton’s actions during the Turkestan incident amounted to mutiny, and the way the generals went after him shows he sent a shock wave behind closed doors in the Pentagon and the White House. Now one of their best boys on the track to general was kicking loose from their control, and they were worried more were going to follow.

Although the charge was reduced to a small fine, Broughton was “tainted” as far as the Air Force was concerned, and he would never make general, a promotion he was promised, ironically, just a few days before Turkestan. Broughton took early retirement and spent nearly two decades going through doubt and bitterness afterwards, but through his mutiny and through leaving the Air Force he crossed over from being a professional warrior to becoming an American-who-fought-for-his-country. I’m not sure you can call a lock-step professional warrior a true American. Could it be that mutiny is at the root of our political identity? Reading Melville, Hawthorne and Jefferson, one might believe so.

I’ve also read Ed Rasimus’s excellent books on his experiences flying Thuds and Phantoms in Vietnam, When Thunder Rolled and Palace Cobra, which provide further evidence of the corruption that can be imposed upon a professional military, especially a professional military that’s cynically used by politicians like Johnson. One gets the sense that while career-track professional warriors manuvering for promotion can be coerced into fighting expensivie drawn-out wars, citizen-soldiers are rather motivated by patriotism and the desire to go home, and in war they fight to win quickly and win decisively. There is for the citizen-soldier no profit in quietly supporting ambiguous national policies or kow-towing to self-defeating Rules of Engagement.

What strikes me about men like Broughton and Rasimus is their combination of keen intelligence, raw ability, expertise, good humor, aggression, cynicism, and boy-scout earnestness. Such men lived through transformative times, and their response to those times is central to the story of our American character. Our nation passed through a tremendous cultural shift between 1945 and 1965. In answer to the emerging mindset of the professional bureaucratic warrior, one might say that in twenty years we had become the Germans we had previously defeated.
Posted by Carter Kaplan at 11:54 AM

Thank you for the kind comments, I think! There is way too much to discuss regarding your conclusions regarding Broughton or your characterization of my classification of the military as careerists and warriors. You might also want to reread my works and note that while there are many reasons to do what the pilots over NVN were doing in the face of a 60% attrition rate, patriotism was not very high on the list.

Broughton was a source of a lot of controversy and his books are his own apologia for his misguided actions. He sowed strife between the two F-105 wings and fostered considerable animosity between Phantom and Thunderchief forces. He knew the rules of engagment and the Turkestan had been a specific briefing topic prior to the incident. He lied to his superiors, covered up the transgression and violated this trust. All of the politically guided ROE notwithstanding, that isn't tolerable. He still sees no guilt in any of it.

I've just completed a collaboration with Robin Olds daughter on the compilation of his writings and memoir. The contrast between the two men in their leadership, devotion to their troops, goals and values is striking.

One was loved by all who knew him and served with him until his dying days. The other has eschewed membership in our group, isolated himself, and would probably be shunned by many if he appeared.

It is difficult to make historic evaluations based on memoirs which are often self-serving, particularly from outside of a very closed culture and profession. You've made the effort, but I would suggest you keep your mind open for more info.

Mr. Rasimus,
I enjoyed seeing your comment. I recently read your book for the second or third time. Really enjoy it. I also enjoyed Broughton's books and Ken Bell's book. I have gr eat admiration for the men who flew into the Red River Valley.
Daren Davidson

I have really enjoyed reading the books written by all of the brave men that flew the F-105 over Hanoi. I was never in the military but I support our military and come from a military family. Reading all of the tales from Rasimus, Broughton, Bell, and others hits my emotions like a sledgehammer and I deeply respect those pilots who had the guts to go up in that plane knowing this could be their last few moments of life before being blown to pieces and incinerated, like many good men were. I become angry knowing that these brave fighter pilots were not allowed to fire back to defend themselves unless they were told they had permission, such as the case with the two pilots involved in the Turkestan incident, which cost Broughton his career.