Was there an Enlightenment?

About twenty years ago, one of my former professors suggested I look up what the historians have to say about the "Enlightenment." I went to the main writers on 18th century history, and they had very little to say about it. There really wasn't much of a movement there; more significant factors include advancements in statecraft (today, we might call these advancements "statism" and "totalitarianism"), European power politics, competing trade empires, and so on. Off the top of my head, it might be suggested the phrase "Enlightenment" has been reified by the postmodernists into a straw man towards which they they can hurl invective.

The actual de facto enlightenment was talk and writing circulating around Paris. And beyond those Paris salons and bookstalls, and beyond a scattering of royal courts in the countryside, beyond the publication of encyclopedias, beyond the career of Voltaire's enthusiasms and disappointments, or beyond Jefferson's admiration for a few French discussions (and maybe his enthusiasm for fashionable Republican haircuts), was there really much to it? Apparently, the answer is "no." The "Enlightenment" was no Glorious Revolution or Good Old Cause. The "Enlightenment" was no American Revolution. And so on.

It might be interesting to see if Kant originally coined the phrase in his essay "What is Enlightenment?"  And, if so, what was he getting at politically, or how was he attempting to parse the history of his time?

My point here is that "The Enlightenment" isn't used by historians. It is a phrase that is used by people in Philosophy and English, and I suppose the Social Sciences. That is, it is used by people who are prone, because of their professional orientations, to see history focused (and distorted, one wonders) through the prisms of their own subjects.

But let's return to the historians:

The historians of European history refer to the period as the "Age of Absolutism," which is marked (like "The Enlightenment") by 1688 and 1789. That is, by the Glorious Revolution and the publication of Locke and Newton's books, at one end, and, at the other end, by the French Revolution.

After the period of the French Revolution, the next period is described by historians as the Age of Nationalism, I believe.

In the Norton series on Modern European History, Leonard Krieger's book on the period (1688-1789) is titled Kings and Philosophers, and I suspect that this book over-emphasizes the influence of philosophy upon history; this was originally suggested to me by another of my professors, nearly 40 years ago. My professor felt that Krieger, in placing great emphasis upon the importance of ideas (shall we call them "fashionable intellectual trends"?) was rather "German" in his approach to the subject, a point which the professor underscored by pointing out the long-winded and convoluted structure of Krieger's prose (and these are criticisms reflected in the Amazon reviews of the book, incidentally; and which can be viewed HERE). 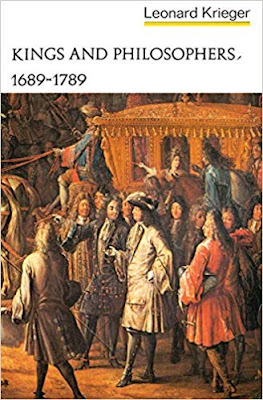 Posted by Carter Kaplan at 4:01 PM