I thought today I should present an interesting juxtaposition.  We  begin with a droll passage from The Scarlet Letter, in which Pearl answers the officials who are considering taking her away from her  mother, Hester Prynne. It is followed by the illustration* of an emotive scene. The image underscores the character of the connection between Hester and the Rev. Mr. Dimmesdale.  Followers of the novel--particularly those who have considered my Afterward to the International Authors edition of The Scarlet Letter--should find rewards, of one kind or another, in the comparison of these two elements.

“Pearl,” said he, with great solemnity, “thou must take heed to instruction, that so, in due season, thou mayest wear in thy bosom the pearl of great price. Canst thou tell me, my child, who made thee?”
Now Pearl knew well enough who made her; for Hester Prynne, the daughter of a pious home, very soon after her talk with the child about her Heavenly Father, had begun to inform her of those truths which the human spirit, at whatever stage of immaturity, imbibes with such eager interest. Pearl, therefore, so large were the attainments of her three years’ lifetime, could have borne a fair examination in the New England Primer, or the first column of the Westminster Catechism, although unacquainted with the outward form of either of those celebrated works. But that perversity, which all children have more or less of, and of which little Pearl had a tenfold portion, now, at the most inopportune moment, took thorough possession of her, and closed her lips, or impelled her to speak words amiss. After putting her finger in her mouth, with many ungracious refusals to answer good Mr. Wilson’s question, the child finally announced that she had not been made at all, but had been plucked by her mother off the bush of wild roses, that grew by the prison-door. 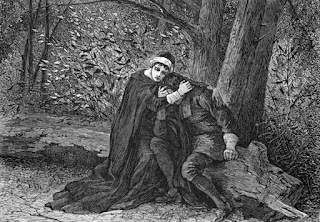 To purchase the International Authors edition of The Scarlet Letter,  please click the image of the cover:

* The illustration is by Mary Hallock Foote, engraved by A. V. S. Anthony.  It is taken from an  illustrated edition published in  Boston by James R. Osgood, 1878.  Source.
Posted by Carter Kaplan at 8:01 PM