Dürer's famous engraving Melancholia I has long prompted interesting commentary, as well as outlandish "occult" interpretations.  Here is the engraving.  By clicking, a large image will appear: 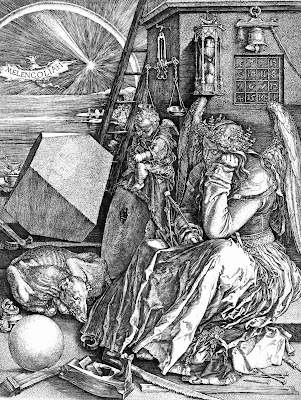 A brief article on a Web site called The Strange World of Albrecht Dürer provides a key to some of the symbols in the image: 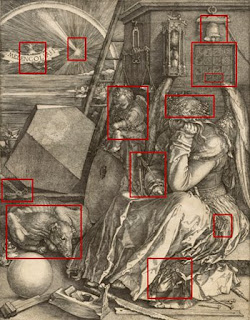 Hammer: Carpenter
Compass: Mathematician
Putto with notebook: Grammarian
Keys: Power
Purse: Wealth
Bell: Eternity
Bat: Darkness. Boiled bats were recommended by the ancients as a remedy for melancholy
Wreath: Made from a plant which was believed to be a cure for excessive melancholy
Comet: Sign of Saturn, the god affiliated with melancholy
Magic square: Orderliness of numbers, each line (horizontal, vertical, diagonal) adds up to 34. Thought to be a talisman to attract Jupiter (The god who could heal the effects of Saturn)
1514: The year of the death of Dürer’s mother. Also the date of this print

Interestingly enough, the block shape--the polyhedron--is not addressed here. The curious shape (and possible meaning) of that block, however, is very much worth dilating upon.  A recent article "Scientists Have Discovered an Entirely New Shape, And It Was Hiding in Your Cells" suggests some new possibilities for considering Dürer's polyhedron. The article describes a three-dimensional shape called the scutoid, which is described as the "twisted prism" shape of cells in epithelial tissue. Here, from the article, is an image of a pair of scutoids: 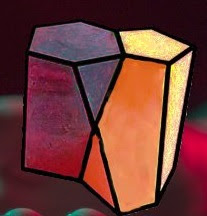 Is Dürer's polyhedorn an epithelial cell?  Clicking the article title above might prove interesting. In the meantime, an older (and possibly the first "academic") analysis of Dürer's polyhedorn can be found in an appendix from Saturn and Melancholy by Raymond Klibansky, Erwin Panofsky and Fritz Saxl. Published in 1964 by Thomas Nelson & Sons. The manuscript had been in development for years, building upon a monograph Panofsky published in the 1920s.  Here are the pages making up that appendix. They are large enough to read if they are clicked. 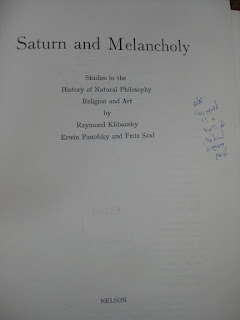 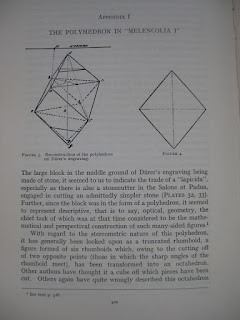 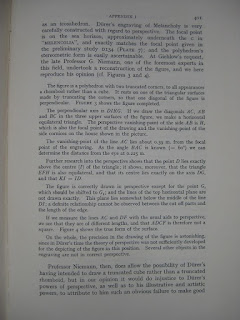 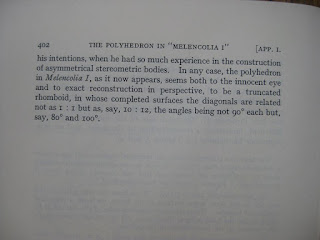 Posted by Carter Kaplan at 2:27 PM