Great difficulties attend the philosophy of Wittgenstein, yet ironically his thought is among the most important to our age, which might serve to explain his popularity beyond the specialized, professional philosophical audience he was writing to. Wittgenstein's popularity is certainly due in large measure to his originality and force of genius, and twentieth century philosophy enjoyed a series of periods in which Wittgenstein defined the moment, and his philosophy in that context has informed other disciplines. In the past two decades, however, philosophers have worked to fully uncover his work, and in explaining Wittgenstein to each other have produced a real renaissance in Wittgenstein studies, making his work accessible to a remarkably broad audience, and so further insinuating his work across the disciplines. Today, exposure to Wittgenstein's life and work has become a rite of passage for the brightest people working in diverse fields ranging across literary criticism, psychiatry, political science, mathematics, theoretical physics, and so on. Richter's Dictionary is a truly useful resource for promoting knowledge of Wittgenstein's important ideas. Clearly written, comprehensive, succinct, this work belongs on the bookshelves of professional philosophers and laymen. Richter's Dictionary is both a general introduction for students, and a handy reference for professionals who need to rapidly make connections among Wittgenstein's work, the discipline of philosophy in a more general consideration, and the concerns of their own projects. Highly recommended. 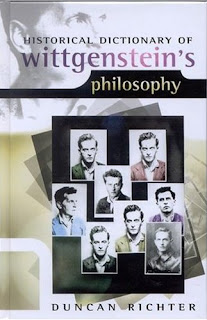 Posted by Carter Kaplan at 9:26 AM