Analyses of the "Activity of Christmas" 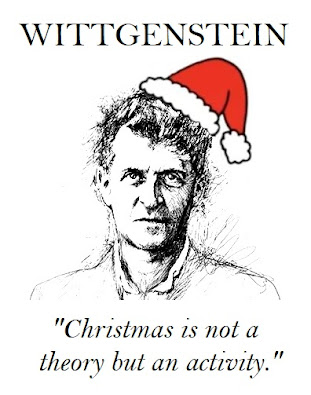 How should I teach a child that Christmas is an activity? And why should I want to?
If a small child who doesn't know the word "activity" is enjoying Christmas, can the child still enjoy Christmas? If not, then what is the child enjoying?
Does the concept of "Christmas" attend the concept of "Christmas activity"? If not, then what is the activity the child is engaging in, and would it be incorrect to say, "The child is enjoying presents, good tidings, the presence of loving adults, but the child is not enjoying Christmas;--could it be possible the child is enjoying something else!
I shew a child with a five- or six-word vocabulary (which does not include the word "activity") a present, and I pass the present to her. She recognizes the image of Santa on the wrapping paper, she opens the present, laughs, understands the object belongs to her in the sense of Locke's idea of possession/property. Is she a) theorizing, b) engaged in an activity, or is she c) enjoying Christmas?

We should draw a distinction between being engaged in "an" activity, and being engaged in activity. And why don't more students appreciate the importance of this distinction!
In what sort of culture--indeed, in what sort of "universe"--is Christmas an "activity"? Was the Nativity of Christ an "activity"? If not, then what was it? If the Nativity was in fact an activity, then what sort of activity was the Crucifixion? And the Resurrection?
What do we mean when we say "Christmas is an activity"? And how is such a statement understood?
Say I tell a graduate student that "Christmas is an activity", and he politely notes that down. Say I tell an important philosopher the same thing, and he shakes his head in mild irritation. Who understands me best? Say their relative importance is reversed, and their responses follow in the same manner; should this influence my understanding of the statement?
Supposing Christmas is an activity; is this what we really want to know about Christmas? If so, why? If not, why not?
When the activity of Christmas ceases but the calendar on my phone insists that the date is December 25; is it still Christmas?
Say a kindly but lonely and feeble old grand-ma'ma is resolute in her conviction that Christmas is a "theory";--should I correct her? If so, how?
Say I meet someone from Mars who asks, "You say Christmas is an activity; how do human beings understand this use of the word activity?" Alternatively, he asks, "How can you be certain Christmas is an activity when so many of you think Christianity is fraught with myths that are untrue, or anyway unprovable?
How might Aristotle draw a distinction between possessing knowledge of Christmas and understanding Christmas? And, assuming he identified a similar distinction, how would Wittgenstein compare and contrast with Aristotle in his (W's) descriptions of this distinction?

Could it be possible that Christmas is simply Christmas?

Posted by Carter Kaplan at 4:19 PM