Here is a brief review of philosophical propositions, previously summarized in Highbrow, June 1, 2019:


A proposition is a statement that can be said to make a claim about reality or a state of affairs.  Our examination of a proposition should seek to identify the proposition’s meaning, its sense (its meaning in context and/or in relation to something else), its verity (true or false?), it’s legitimacy (whether it is the case or is not the case) and the proposition’s appropriateness. Identifying the context in which a proposition is uttered is key to answering these questions and to coming to an understanding of the proposition.

For the nonce, let’s say that there are four types of propositions: 1) Analytic, such as, “two and two is four”; 2) Internal, such as “I have a headache”; 3) External, or Empirical, such as, “I hear a Cardinal in the trees” or “I see an error in the data"; and 4) Categorical/Subjective, such as, “stealing is wrong" or “the ‘Mona Lisa’ is a beautiful painting.”

I am wondering if there is after all only one type of proposition that can either be true or false (or anyway that can be proven true or false with logic): Analytic. The others are rather statements of a different order. Internal propositions do not describe anything that can be logically proven: whether they are true or false has little or no bearing upon our philosophical understanding or a description of actual reality. Rather, such statements guide (or do not guide) our behavior and our utterances. External propositions can be no more than descriptive. If descriptive statements are false then they are simply nonsense, and thus are not propositions; that is, they don't inform us about anything, except perhaps that a person who vocalizes them is stupid, lacking a reliable or reasonable sensibility, or is lying. Categorical (aesthetic, moral, political) propositions—or rather the expressions of moral, aesthetic, or political views—are neither true nor false, they are simply statements about belief or conviction. The question is, are they persuasive or do people agree?

Let's dilate on these ideas through a series of questions:

2) Can you prove a moral proposition?  Yes or no, and why?

3)  After thinking about these two questions, consider the following: is it possible to prove a moral proposition (stealing is wrong) the same way you can prove an analytic proposition (two and two is four)?

Consider being in a situation in which you were asked to "prove" that you have a headache.  Outside of a philosophy or ethics class, where a lot of curious (but also silly) questions are discussed, people do not normally need (or are asked) to prove that they have a headache.  What philosophers do is misuse language to create questions that are not really questions at all. These questions are rather "playing around with words". Philosophers are making up questions and concepts that are based on the misuse of words and language.  This is what Bacon is talking about in the Idols of the Market and the Idols of  the Theatre.  Sometimes Philosophers are not talking about the real world, but instead are talking about abstractions--using words that sound like you are talking about something, but are really just parts of the real word.  An "abstraction" is a "part".  Consider the following discussion of abstractions and conceptual confusion from Highbrow, August 6, 2019:

Kandinsky's dynamic drawings are wonderfully pleasing. They underscore the beauty of the original subject as well as represent impressions that move us emotionally.

They also elegantly illustrate the principle of conceptual abstraction.

Compare two-dimensional cardboard stage scenery in a theater, and picture the erudite fellow acting as though these cut-outs aren't flat pieces of scenery, but are actual buildings, real trees, three-dimensional hills hundreds of feet tall, or what have you. The lecturer can deploy all sorts of learned "examples" and "statements" (that is, effervescent terminology and exhilarating traces of cogitation concocted by other philosophers) to create the impression that these are important concepts, and he can speak and act as though his fluently equivocating upon these abstractions is discussing the real world, but the fact remains the lecturer is merely discussing abstractions--fanciful sketches that suggest or thinly evoke reality, but are actually illusions, wispy figments, evanescent nebulae, and fading imitations.

For further elaboration, see Bacon's remarks on the Idols of the Theatre in the Novum Organum, or Melville's dilation upon the images of whales in chapters 55, 56 & 57 of Moby-Dick.

If you need to review, please click HERE for a summary of Bacon's Four Idols.

A good way to think of Bacon's Idols of the Theatre is to picture a philosopher standing on a stage with cardboard trees on either side of him. Say the cardboard tree on his left has the word "Absolutism" written on it, and the cardboard tree on the right has the word "Relativism" written on it.  These two-dimensional pieces of stage scenery resemble trees, but they are not real trees, they are abstractions. In the same way, the concepts of "Freedom" and "Determinism" can be mere abstractions.  As Bacon says in his discussion of the Idols of the Market-place:


Learned men are often in error in their definitions and explanations because words plainly force and overrule the understanding, and throw all into confusion, and lead men away into numberless empty controversies and idle fancies. 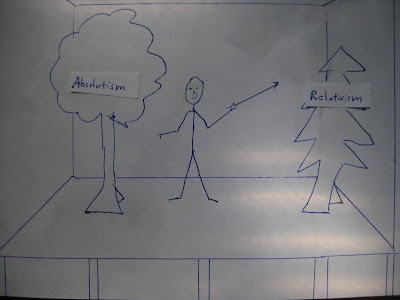 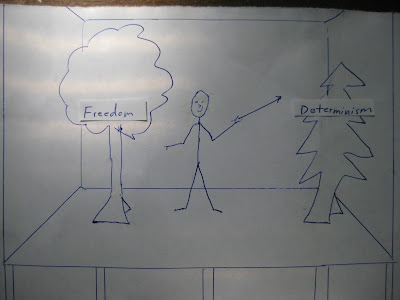 Among moral philosophers, a subject of interest is "Absolutism vs. Relativism," but in exploring this dichotomy they are not talking about the real world, they are talking about abstractions.  "Absolutism vs. Relativism" is an example of what Bacon means by "empty controversy".   In the philosophical discussion framed by "Freedom vs. Determinism," we see another example of an "empty controversy." Very often, because they are not careful with the way language shapes their concepts, philosophers get carried away discussing abstractions that are mere two-dimensional stage scenery that resemble things in the real world, but which are not things in the real world.

Here is more of Bacon's discussion of how words are misleading and thus misused:


But the Idols of the Market-place are the most troublesome of all: idols which have crept into the understanding through the alliances of words and names. For men believe that their reason governs words; but it is also true that words react on the understanding; and it is this that has rendered philosophy and the sciences sophistical and inactive. Now words, being commonly framed and applied according to the capacity of the vulgar, follow those lines of division which are most obvious to the vulgar understanding. And whenever an understanding of greater acuteness or a more diligent observation would alter those lines to suit the true divisions of nature, words stand in the way and resist change. Whence it comes to pass that the high and formal discussions of learned men end oftentimes in disputes about words and names.

Second Question:  Can you prove a moral proposition?

I believe that the only proposition you can prove with logic is the Analytic proposition.  The other three, Internal, External/Empirical, and Moral (and aesthetic and political) propositions can not be proved with logic, but are rather issues of conviction, opinion and consensus.  Thus:

External/Empirical propositions are statements people make when they are working together to assess a situation, evaluate scientific data, and so on.  We don't use logic to prove them, but rather we make statements about our observations, our disagreements, our agreements and our consensus.


Moral/Aesthetic/Political propositions are categorical, they are based upon assumptions, convictions and tastes that people hold.  We don't use logic to, strictly-speaking, prove them; but, yes, we do use logic as we present the reasons why we hold these convictions. Thus in these discussions, logic is a matter of linguistic accuracy, grammar and understanding, but not scientific proof.


Third Question:  Is it possible to prove a moral proposition (stealing is wrong) the same way you can prove an analytic proposition (two and two is four)?

Again, you cannot prove Moral, Aesthetic or Political propositions. We use logic to argue for our convictions and tastes, but logic cannot prove our convictions.  Kant is a memorable example of a person who thought logic and reason could be used to prove Moral and Aesthetic propositions.  He actually believed that we (or rather important philosophers) could use logic to prove that one work of art is better than another, or that one piece of music is better than another.

In a few days, we will consider this third question in greater detail as we examine G. E. Moore's Naturalistic Fallacy.

Until then, count on me to maintain my important efforts entertaining the Highbrow Commonwealth and the wits who make up its polity with the usual hastily-drawn bits of nonsense and ephemera that comprise the materials that concern us.
Posted by Carter Kaplan at 4:03 PM