Here I offer brief sketches of Thomas Hobbes (1588-1679) and John Locke (1632-1704). My sketches follow the three-step scheme presented in the Highbrow post "Moral Philosophy in Context." Please click HERE for the elaboration. Through analyzing Locke and Hobbes along these lines, we can gain a fresh understanding of the familiar academic dichotomy called "Hobbes vs. Locke." 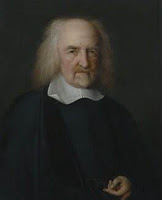 Human Nature: Human beings are machines that are hungry and selfish and they prey on everything including each other.

Human beings are viscous machines and they need to be controlled by a state.

Society:  There is no society without a state, and human society is imposed by the state. Human beings need to be controlled in order to create conditions under which economic activity, civil coexistence and worthwhile patterns of human life can be sustained; therefore, any kind of state that controls human beings (by maintaining the social contract) is good. Hobbes is predisposed in favor of monarchy. 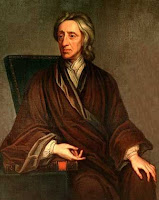 There is no conclusive scientific proof that the universe is a big empty space filled with atoms that interact according to strict deterministic and mechanical principles. The universe is not a big machine. Hobbes' theory is not a comprehensive model that explains everything that happens in the universe. Clearly, there are things about the universe that we do not yet understand.

Human Nature: Human beings are imperfect but they have a capacity for great good and God loves them. Human beings have God-given rights, as can be seen through studying nature (this is an implication of Aquinas's Natural Theology).

Human beings naturally live in society and they are predisposed to live in peace; respecting each other's property comes naturally. There are, however, some people who are greedy and they do not respect other peoples' property, liberty, life, and other rights. Human beings are often weak, and so their rights need to be protected by powerful (but controlled) forces.

Society:  Society comes before the state.  People give some of their power to the state to protect their rights. If the state/government is corrupt and fails to protect their rights, people have the right and the duty to change their government. Governments should be constituted so their powers are limited under a system of checks and balances, and according to constitutional specifications separating and designating the various magisterial (executive and judicial) and legislative powers.

We might reflect here that Locke was a scientist (medical doctor, and professor of medicine at Oxford University) and he "wrote the book" on how we preform science even today.  Hobbes was not a scientist.   Now, does this help us to understand that Hobbes' "scientific theories" are weak--they are just "theories."  Meanwhile, Locke (a scientist) is viewing the universe with appropriate skepticism and an open mind, and rather than relying upon abstractions and theories, he sticks to the facts. Moreover, he has the ability to confront the facts (or a mystery) and honestly say, "My goodness! We just don't know. Let's work on this mystery together, my friends, and see if we can improve our understanding."

People who need to control other people make up all kinds of explanations and reasons (philosophical, pseudo-scientific, "claims to privilege") in order to justify their authority. It follows that their philosophies, their pseudo-scientific claims, their "sense of privilege" and their "sense of elite superiority" are prone to corruption, if they are not themselves corruptions at the outset.


Here are some related discussions:

Aristotle and the Meaning of Eudemonia

These materials will prove helpful in building a picture of "Classical Liberalism" (Locke, Franklin, Jefferson, Madison, etc.), and they represent a framework for understanding the philosophical and political foundations of the United States of America.

The Idea of the Nation-State

A Final Remark from Aristotle