Taken form the Studio Kosmos blog (which is in Italian), here is a translation of Dario's statement regarding the art of translation:


Translator (why otherwise would I be here? By the way, thanks to Daniela Fava [the Kosmos boss] and hello to readers), blogger (like everybody ...), writer (a late but quite successful one: the book Dante was a Fantasy Writer, recently released, has already been published also in America), journalist (with a glorious future behind), lecturer (much appreciated), illustrator (but not a prophet in his homeland, because my publishers and collectors are all in the U.S.). I try to deal with serious topics as science-fictionally as possible.

In addition to Kosmos, where I work out the Italian version of specialist articles, novels and websites, my main task consists in the translation of sci-fi novels for the classic series "Urania", with a slew of titles made in a few years.

Moreover, in these last two years, and again for at least a year, I was absorbed almost 100% in the pool of translators who takes care of the international project "The Complete Works of Raimon Panikkar," an Indo-Spanish thinker.

In my opinion, the first requirement to translate well from English is to know Italian and enrich the nuances of words, so I cultivate a series of mental gymnastics:

- Sit-com conversations with my sweet wife;
- Epic, philosophical, experimental poetry, such as Dante, Ariosto, Tasso, Milton;
- The lucid, witty, evocative art of Hokusai and Surrealism;
- The alternative science, from "what-ifs" to the most funny theories;
- The cosmic philosophy of Spinoza, Leibniz, Hegel, Nietzsche;
- All, in the balance between the Piedmontese ironic Guido Gozzano and English epic Beowulf 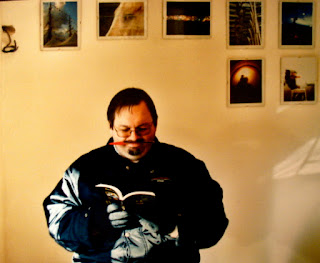 Posted by Carter Kaplan at 8:46 PM