On behalf of International Authors in association with GuardaStelle Edizioni, Italy, I am happy to announce the publication of Dante was a Fantasy Writer by Dario Rivarossa. 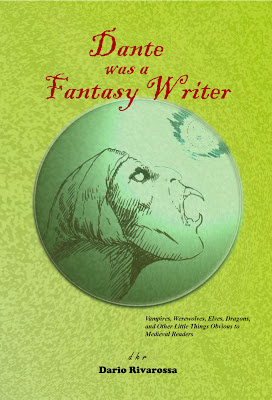 The word “Middle Ages” evokes fairies, elves, dragons, witches, magical enchantments, the mysteries of the Knights Templar, and popular events such as Palios, rides, and tournaments. Did all of these things already “exist” in the Middle Ages narrated by Dante, or are they just modern fantasies? And if Dante talks about such wonders, where does he? And how?

On a quest to answer such questions, Dario Rivarossa leads the reader on a journey through the “open secrets” of the poem par excellence of Italian literature. Here is an original and unusual essay, capturing many aspects of The Divine Comedy that remain hidden to modern readers. Conveyed in a humorous and engaging style, the study is notable for rigorous scholarship and insightful critical observations. It is a wonderfully engaging book for both students of Dante and the non-expert audience.

The book features 100 color drawings — as many as the Cantos in The Divine Comedy — prepared by the author.

Dario Rivarossa was born in 1969 in Savigliano, Italy, hometown of the astronomer Giovanni Schiaparelli. He currently lives in Perugia, internationally known for the Renaissance painter “Perugino” (Pietro Vannucci), who was considered the greatest artist ever, at least until eclipsed by Leonardo Da Vinci, Michelangelo, and Raphael. He is a translator (English, German, Classical Languages to Italian), essayist, journalist, lecturer (especially for the Dante Alighieri Society), and illustrator. Two series of his illustrations based on Milton’s Paradise Lost belong to prestigious collections in the United States. His experimental Miltonian haiku PL 575 have been published in the anthology Emanations: Second Sight, also published by International Authors. Happily married to Paola. Website.

Carter, again a billion thanks for everything!


Ah, thank you, Dario. Your work is putting International Authors on the map!