Eduardo Paolozzi at New Worlds: Science Fiction and Art in the Sixties by David Brittain

Today I would like to recommend Eduardo Paolozzi at New Worlds: Science Fiction and Art in the Sixties by David Brittain. 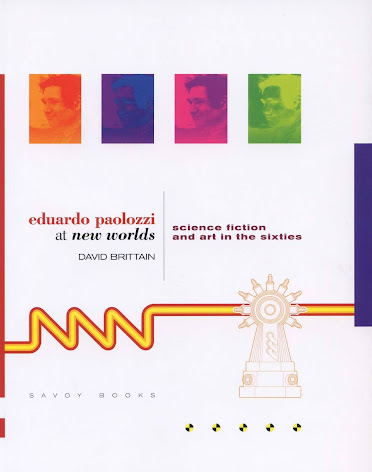 The Amazon sales page (click the cover image) identifies J.G. Ballard as the author.  This is an error. The author is actually David Brittain.  Here is the Amazon description:

Beginning in the mid-1960s, New Worlds magazine, under the visionary editorship of Michael Moorcock, evolved from a small science fiction monthly to a radical publication that exemplified the collisions between art and popular culture at the time. Artist Eduardo Paolozzi, whose work was regularly featured, played a pivotal role in defining its examination of the increasingly technologised media landscape of the 20th century and science fictions new wave. With rare images and excerpts from an unpublished novel by Paolozzi, the book offers fresh insights into the way images and a fragmentary, collaged approach to writing drove breakthroughs in the visualisation of our future.

I wrote to publisher Michael Butterworth asking how the book came to be written.  Here is his reply:

I commissioned the book after coming across David Brittain’s The Jet Age Compendium: Paolozzi at Ambit, published by Four Corners Books. David’s book was about Ballard as much as Paolozzi, and at the time was widely distributed in art cultural circles. I saw in it the beginnings of a possible discussion about the overlooked visual aspect of New Worlds, and asked David, who fortunately I knew through Corridor8, whether he would write a book about Paolozzi at New Worlds, focusing on the important visual side of the magazine. He agreed.For decades the only other book on the New Wave was Colin Greenland's The Entropy Exhibition, which, crucial as it is, focuses on the literary side of the movement. The visual side hadn’t been written much about, and I felt it was in danger of being overlooked, especially in America. To give one example of what I mean by this, when I interviewed Richard Kostelanetz for soanyway, about six or seven years ago, and the subject of New Worlds came up, he told me he had copies in his (vast) library. He left his laptop to go look for them, but it turned out what he had were the Panther anthologies, and it was clear from this that his conception of what New Worlds was all about came from these. He had no idea of the highly impactive large format editions from 1967-1970, or the interesting ‘samizdat’ large format editions that followed. I sent him a big package of what duplicates I could muster pretty quickly, to repair the hole in his collection.The book took about a year for David to write – he had more to say about Paolozzi and Ballard – so the commission worked out well for both of us. He suggested I commission new artwork from Pam Zoline for the endpapers, which I did. John (Coulthart) then designed it, and then we, Savoy, published it. I managed to get it very widely distributed in bookshops and art galleries (eg The Tate and others) around the world. It sold out of its print run of 7,000 very quickly. We could have sold twice as many, but didn't have the money to reprint it. In full colour, the production costs were very costly, and what revenue it generated was needed on other projects. But it did what I wanted, spectacularly, and also brought New Worlds to the attention of a whole load of new contemporary readers.It was a generous thing for David to do. I respect David a lot. He isn't your regular academic – and I didn’t want him to write anything overly academic in any case. As his write-ups testify his background is in journalism and broadcasting. For ten years he was editor of the photography magazine, Creative Camera, and he was also a contributor to BBC Radio Four and involved on the production of a series of documentaries for BBC TV’s The Late Show, including a profile of the photographer William Klein. He was who I wanted.Before this book, who in the SF field had written the whole story about New Worlds? If it is read in tandem with The Entropy Exhibition, it completes the story.

Posted by Carter Kaplan at 1:50 PM