Philip K. Dick and the Technocrats

Philip K. Dick has done interesting work anticipating the advent of billionaires possessing technological tools so powerful that they easily circumvent and displace traditional models of governance.
Do Androids Dream of Electric Sheep? is rather a philosophical inquiry into the character of empathy and its place in our understanding of human nature.  Bladerunner, the film based on this novel, integrates Dick's theme of high-tech billionaires, but in the novel the technocrats are secondary to the philosophical theme.


It is one of Dick's most important novels but in regard to the theme of monolithic technocracy, these two novels come to mind first:


The Three Stigmata of Palmer Eldritch
In the novel, drugs are the tools used by two rival technocrats to control the shape of human identity and human history.  The drugs are so powerful that they can be compared to possible future virtual-reality technologies that are supported by artificial intelligence. 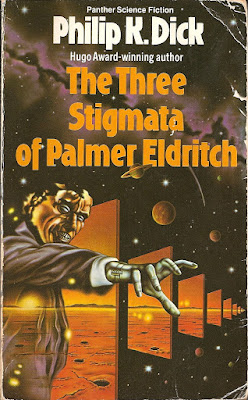 The Penultimate Truth
There are two themes in this novel that could compare to our contemporary situation: 1) In the novel, ecological devastation following a nuclear war requires isolating human beings below ground in subterranean cities (called "ant tanks").  The environmental threat, however, is exaggerated to control the population, which brings us to the second point of possible comparison:  2) The elitist control of news and media is total.  The super-rich manipulate their propaganda to keep the Earth's population underground. 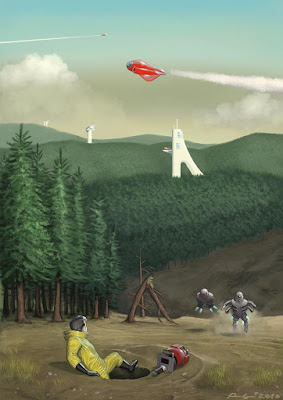 Artist's statement: "Nicholas St. James emerges from his ant tank, the 'Tom Mix'; he is immediately spotted by two leadies, which are coming to get him."
Source.
Posted by Carter Kaplan at 10:25 PM