John Milton’s Place in the History of the Dutch Republic

John Milton gets a mention in Russell Shorto’s book on the founding of New Amsterdam and New York City, The Island at the Center of the World. After the initial 1652 naval battle off Dover, in what would become the Anglo-Dutch War:

[Adriaen] Pauw left for London to take part in emergency talks with Cromwell’s Council of State (where, incidentally, the man he would have dealt with as Cromwell’s translator and foreign speech writer [Secretary of Foreign Tongues/Latin secretary] was no less a figure than the poet John Milton). (248-249)

The talks are described by Leo Miller in John Milton’s Writings in the Anglo-Dutch Negotiations, 1651-1654—a book I have yet to read. What I will be looking for, specifically, are descriptions reflecting Milton’s “persona” as a bureaucrat and negotiator.  Milton’s prose writings are characteristically elegant, forceful, thorough, and “authoritative.” Did his manner in committee meetings reflect his prose style?  And as for Milton’s “deeper” mode: when in meetings or during negotiations, was he susceptible to dropping an ironic word? One might think so, but I doubt it.  I rather suspect his manner was pleasant, but closely measured.  On his mission from the Dutch Republic, Adriaen Pauw might have gained some insights into the character of the English adversary, as he balanced his impressions of Cromwell’s avid and aggressive nature against Milton’s fluency and charm. But this is speculation.

Meanwhile, here is Gerard ter Borch’s painting of Adriaen Pauw with his wife and granddaughter approaching Münster for the peace negotiations of 1648, which would lead to the end of the Thirty-Years War, with the Treaty of Münster and the Treaty of Westphalia. Happier times. 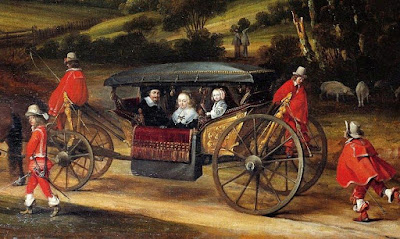 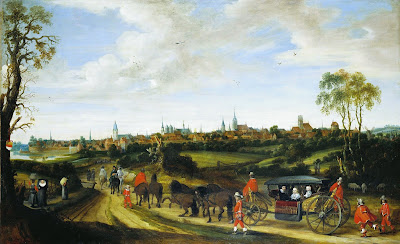 Posted by Carter Kaplan at 1:32 PM