First is Horace Jeffery Hodges' novella, The Bottomless Bottle of Beer.  Professor Hodge's novella (with illustrations by Terrance Lindall) originally appeared in Emanations: Second Sight.  In revising the tale for Kindle, Professor Hodges made several changes, and in responding to my request for a description of these changes he advised me they were modest:

1) Correction of errors: mine, yours, Terrance's (i.e., editorial errors rectified)
2) Clarification of allusions (e.g., to Melville, Balzac)
3) Expansion of a couple of transitional passages (for better continuity)
4) Separation of text and illustrations (due to Kindle's inability to handle both together)

I should add that the Kindle version contains many additional illustrations that were not in the Emanations version.  Of note is Mr. Lindall's illustration of the courtroom scene. On the floor is a copy of Emanations in flames: 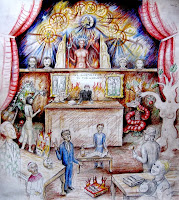 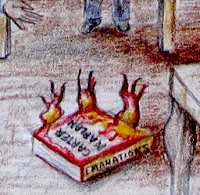 The Bottomless Bottle of Beer can be purchased HERE for a nominal charge.

Another International Authors production that has found its way to Kindle is Dario Rivarossa's engaging and readable study, Dante was a Fantasy Writer, which can be purchased HERE. Mr. Rivarossa has advised me that a number of secondary schools in Italy have selected the original Italian version of Dante was a a Fantasy Writer to introduce students to the Divine Comedy.

Finally, Elkie Riches' novel Reclamation is now available on Kindle.  As captivating and miraculous as the visions experienced in the pre-dawn state of lucid dreaming, Ms. Riches' extraordinary book can be purchased by clicking HERE.

While I appreciate how Kindle can save money and space, my personal preference is for solid physical books; nevertheless, I will be looking closely at Kindle and applying my highbrow faculties of understanding to the phenomena (and epiphenomena) that might be revealed through an in-depth philosophical analysis of this brave new technology.

Many thanks, Carter!
To be more exact, I often present the book to secondary schools (e.g. on Friday, Oct. 18). Copies are usually bought by teachers, very rarely by students though.

Ah, well! We have to get you a sales kit, consisting of a handsome leather briefcase containing a half-dozen copies of the book, and lots of cigars you can pass out to the teachers as friendly little "bribes"--nice big hand-rolled Havanas, but no strings attached, of course!

The cardboard boxes are brought by the publishers themselves, just to show that Culture is not against Sport. As to cigars, hmm, 90% of the adults partaking in the lectures are middle-aged or old women. What about mint candies?

By all means, and perhaps free ball point pens with "Dante is my Homeboy" written down the side?