The International Authors edition of The Scarlet Letter 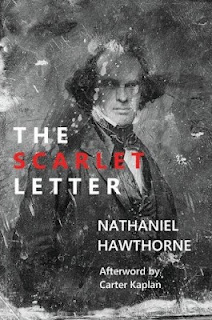 Nathaniel Hawthorne (1804-1864) was an American short story writer and novelist. Known for sophisticated allegorical and moralistic tales often set in New England, he was the first American author to produce a uniquely American epic, The Scarlet Letter, a work that sets the pattern for the Great American Novel, a thematic form built upon a post-Calvinist worldview that intermingles an ironic appreciation for human individualism with a determined commitment to political liberty and intellectual freedom. Herman Melville’s Moby-Dick and Mark Twain’s The Adventures of Huckleberry Finn are heirs to Hawthorne’s revelation.

Nice effect with the word "Scarlet" in scarlet.

Why not allow Amazon to use "Look inside the Book"? If some of your essay could be seen, that might attract readers.

Thanks. I'll follow up on your "Look Inside the Book" suggestion.

>Nice effect with the word "Scarlet" in scarlet.

And using letters to compose the word "Letter"!

Yes, not too many people use letters in this way!

I just don't write letters anymore. I email instead . . .